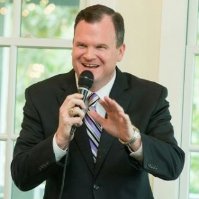 Shane Griffin is a Senior Marketing Consultant at iHeartMedia in Charleston, SC, where he helps businesses build revenue and brand awareness with targeted radio and digital marketing campaigns. In addition, Shane is also the Public-Address Announcer for the South Carolina Stingrays hockey team, the Public-Address Announcer for The Citadel Football team, and the P.A. voice of the Palmetto Christian Academy Fighting Eagles.

Shane has spent most of his professional career in the radio industry, emulating his father – Gary Griffin – who had a 40-year career in Charleston radio on 103.5 WEZL. Over his own 30-year radio career, Shane has been a radio ‘disc jockey’, a sports talk show host, a baseball play-by-play announcer, and a financial talk show host.

He is married to his college sweetheart, Andrea, and they live happily ever after with their two Chihuahua’s Mr. Ears, and Molly.